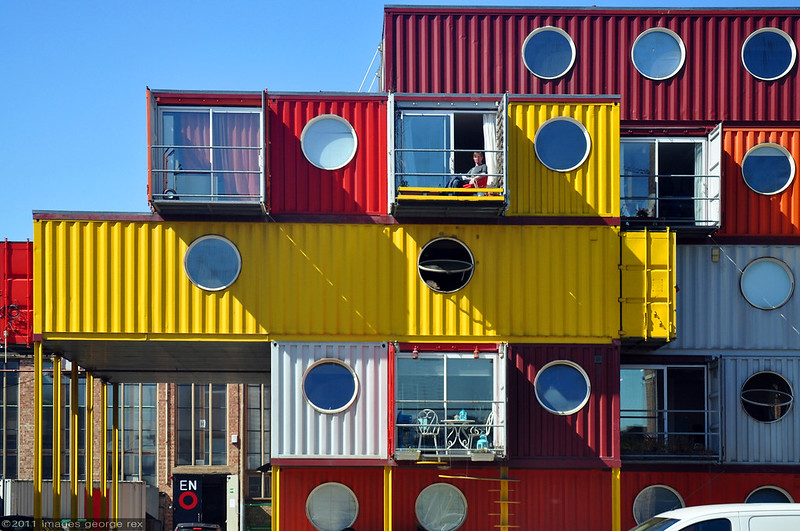 When American truck driver Malcolm McLean envisioned the container concept in 1937, he had in mind to eliminate the waste of time that he and his professional colleagues had to undergo while waiting for fractional loads to be removed from their trucks and loaded onto ships.

The idea was only put into practice in 1956 and, since then, all containers are manufactured within standard measures that occupy 2.44 meters in width by 2.59 meters in height and 6.06 or 12.192 meters in length.

They are light steel structures, extremely resistant, and produced aiming at a perfect fit, which allows the stacking of up to 12 units when empty. Its acceptance was such that, nowadays, approximately 90% of the worldwide transport of goods is done by containers.

But that success also brought a burden. The useful life of a container is approximately 10 years and the cost of shipping without cargo does not compensate for its return due to the low price of a new unit. This led to the emergence of abandoned container cemeteries in ports around the world.

The increasing availability at a low price coupled with modular features has attracted the attention of architects and designers. They also saw in the containers an option for civil construction that brings benefits to man and nature, in addition to adding modernity and creativity to their projects.

Probably Malcolm McLean did not imagine that his invention, which revolutionized the transport industry worldwide, would one day incorporate utilities ranging from temporary shelters to high-end offices and homes.

The advantages of using containers are impressive: use of discarded noble material, the economy of natural resources (sand, brick, cement, water, iron, etc.), less generation of rubble, use of much less labor, cost reduction with the foundation than traditional buildings, lower costs and reduced work time, in addition to having socially correct values such as recycling and sustainability.

In order to be used as a home or office, the container needs to undergo a renovation that includes sandblasting with an abrasive to eliminate the toxic paint used to resist its maritime life and the replacement of the original floor, which contains chemical pesticides for pest control. After this decontamination, the container will probably need cuts in the steel for making openings and welding work carried out by specialized labor. However, even with these investments, its supporters claim that the use of containers still brings cost savings.

Among the examples of the feasibility of using containers in civil construction, the “Container City” project in Trinity Buoy Wharf – a center for the arts and creative industries located on London’s wharf; Keetwonen, the largest container village in the world, with 1,000 student houses in Amsterdam, the Netherlands, and Container City in the city of Cholula, Mexico, which has an area of 5,000 m² with the use of 50 containers transformed into bars, stores, bookstores, art galleries, restaurants, bakeries, and even hotels.

In addition, containers are also increasingly used in commercial activities, such as the “Puma City”, which has traveled around the world, the “Freitag Flagship Store”, located in Zurich, Switzerland, and the Illy Cafe kiosk.

Sustainable but not so much

Environmental issues are taking shape all over the world, making more and more people open to alternative solutions that imply the reuse of discarded materials, less energy consumption, and reduced use of natural resources. However, some experts warn that, eventually, what presents itself as an ecological alternative, is not always so green.

In the specific case of reusing containers, the amount of energy needed to make them habitable is often not taken into account. As already mentioned, the structure needs to be sandblasted with abrasive material, producing tens of kilograms of toxic waste and the displacement of the container with heavy machinery requires considerable consumption of fossil fuel.

Another issue is that an individual container is not enough to create habitable spaces. To make the environment suitable in size, it is necessary to combine more than one box, which again requires energy.

In summary, some currents argue that it can be cheaper and more rational in terms of energy consumption, to erect a similar construction using a structure with conventional materials. Container houses would be more appropriate where there is a shortage of resources associated with the large availability of this discarded equipment. They also believe that containers are better suited to meet immediate shelter needs, such as areas affected by disasters.

A fetish of the modern era

The container has conquered the world as a practical, safe and cheap alternative for the transport of goods, but precisely because it is standardized and has characteristics such as resistance and lightness, besides being available in several places at low cost, it ended up attracting the attention of architects, artists, and designers.

Today it’s possible to see residences, student accommodation, shops, and hotels that use containers in their construction. But, in addition to their material characteristics, they symbolize the way we live and where we are located in these times of globalization and mobility.

According to the ethnologist Hartmut Böhme, the container is a “fetish of the modern era, representing cataclysms, mobility, and change”. In any case, its use allows the association of modernity, the rational use of spaces and natural resources, in addition to a revolutionary aesthetic proposal.

(Article published in the first edition of MultiArmazéns Magazine)

How to get more effective results with storytelling.